Yes, I know it’s the wrong season for wearing cowls, or mostly the wrong season; when I worked in an office, the air conditioning ensured that I could’ve used all the hand knits I had all summer. However, spring & summer are the right seasons to knit cowls. Really, any season is the right season to make cowls; they’re small projects, a fast and satisfying knit. In the summer, their smallness means so you don’t have the weight and wooliness of say, an afghan or the body of a winter sweater on you. They’re also easy to take with you when you travel. So without further ado … 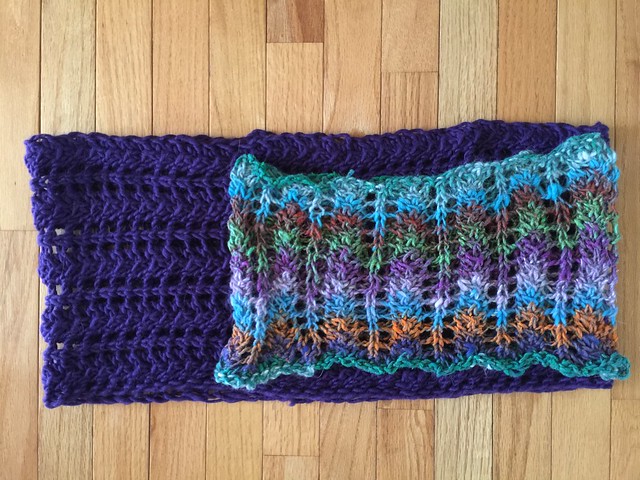 Quill Eyelet Cowls! A pattern two-fer (two patterns, one file) that’s available on Ravelry and Craftsy for free until April 22. If you’re not a knitter, both the small and long cowl samples I made are available on etsy and I’m more than happy to create a custom listing for you.

My Wordless Wednesday this week was a visual tour of my design process. A week ago I started thinking with yarn again, playing with stitches. I tried cables again but that wasn’t working – it turns out double-sided cables have limits; they can’t travel horizontally across the fabric and still be reversible. I gave up on trying for a reversible fabric and tried to find a lace pattern that I liked. I pulled out Knitting On The Edge and Knitting Over The Edge, which have always inspired much more than just edges for me. Side note: Barbara G. Walkers Treasuries have been on my wish list for years but I just haven’t gotten around to getting them; if you’re reading this and wondering what to get for my birthday next month here is a big hint. 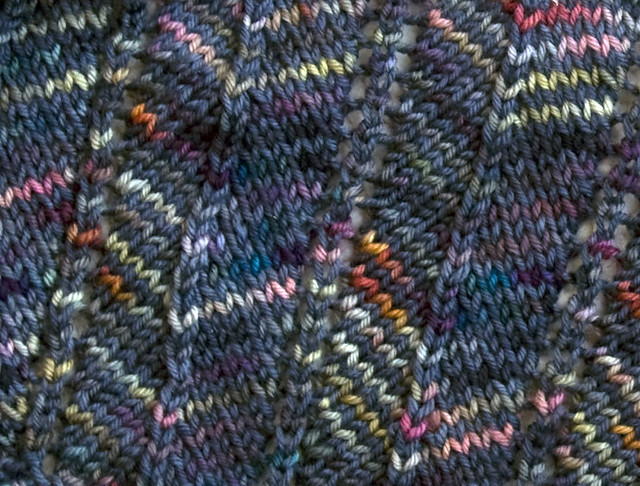 I wanted something airy for the warmer months and something that would show off the texture and color variegation in the Noro Akogare I bought in a stash sale on Ravelry. I found the quill eyelet edging in the lace section of Knitting On The Edge. It’s similar to and pictured on the same page with razor eyelet, which I’m familiar with from knitting Lisa Bruce’s Favorite Scarf Ever; to the right is a close-up of my version.

Quill eyelet is much more airy than razor eyelet; the solid part of the knitting is much more narrow. This makes it a perfect spring-summer-fall cowl, a cowl that’s more for looks than for keeping warm. I wanted the first cowl to be a long loop that could be worn doubled, so I used a provisional cast on, knit it flat, and grafted the ends together. It took about 150 yds (more than 1 skein) of Valley Yarns Berkshire to finish and I knew that making the same cowl in Noro Akogare would take two skeins since they are put up in 102 yard skeins. I thought it would be better to design something that only takes a skein of really nice yarn for knitters who have fallen in love with a yarn but can’t afford more than one skein, or for those of us who fall in love with a yarn and buy it without having a project in mind. So I designed the second cowl to be smaller and knit in the round to show off the wavy horizontal edge that quill eyelet makes. And that’s how the Quill Eyelet Cowls came to be. ::bows::