After our most busy day on the trip on New Years Day, January 2 found us limping along. Or at least I was limping along. We were all tired and cranky, and Mr. Q and I started the day of pretty tensely because of some petty disagreement the previous day whose origins I can’t even remember. We left the motel around 8:30 and headed to McDonalds for a quick breakfast. This particular McDonalds had the usual counter with the addition of a separate counter for the McCafé, which featured fresh-baked items, special sandwiches (like Starbucks sandwiches but better), and espresso-based drinks. Like every other place in NZ serving coffee, they had a coffee grinder and an actual espresso machine (not a fake, instant coffee espresso machine). I ordered a latté or a flat white (I can’t remember which) and a blueberry muffin and this is what I got:

I wish McDonalds in the US had McCafés like these. They also had several touchscreen stations available where you could place your order instead of talking to a person at the counter. The novelty of ordering this way slowed us down and breakfast ended up taking much longer than I think Melanie anticipated. I think she was trying to get us to Waiotapu Thermal Park in time to see one of the geysers erupt, which we did manage to do – it was Lady Knox Geyser and I only took one pre-eruption picture. The viewing amphitheater was mobbed with people, standing (and kneeling) room only and it was so difficult to get a clear picture of the eruption that I didn’t even bother. I also have to say that once you’ve seen Old Faithful erupt, you’ve seen them all, though the story behind the discovery of this geyser is interesting.

Then we walked/hiked a long loop through the park. I took a lot of pictures and some videos, most of them people-free. A lot of my vacation pictures are people-free; I want to remember what it was like to be at these places, to see these things first-hand, and for me that involves pictures that try to make it look like I was the only person there. The park was mobbed, not quite at Disney during peak season levels, maybe Disney in off-season levels. Crowds like that tend to clump together naturally so there were lulls and I got some great pictures and video. Here’s my favorite video, of the Champagne Pool. My apologies for not turning my phone on its side; I’m an amateur videographer and didn’t realize this would limit the videos best viewing experience to phones/pads. The video really looks best in HD on youtube.

Here’s a selection of some of my favorites from Waiotapu Thermal Park; you can see the whole album (and all the videos) on flickr.

I have to say these panoramas looks fantastic on Facebook and not so fantastic here. Facebook has a thing where you can rotate and pan panoramas so the perspective looks right.

After having lunch at the park café, we headed off to Hell’s Gate for the mud bath and sulfur spa. My husband has all the pictures of this adventure – I didn’t dare bring my phone that close to a source of obvious destruction. The mud bath wasn’t quite what I thought it would be, more like a hot tub with access to a small clay tub instead of a bubbling pool of mud. The package we bought gave us 20 minutes in the mud bath, then a quick shower to lull us into thinking we washed all that clay off, a plunge into the cold pool, which has a waterfall, and then unlimited time in the sulphur spa, a large stinky hot tub. I tried not to think of all the people who were in these spas before me or the last time they were cleaned. It was neat to play with mud and the sulfur smell didn’t bother me as much as it bothered others with us, which is a good thing: our swimming togs still smell like sulfur and in trying to get them clean, we’ve collectively contaminated 2 other loads of laundry with the smell.

After Hell’s Gate, our squeaky clean but smelly party headed back to Rotorua. It was late afternoon by this point but the weather was better than it had been the previous day, so everyone that wanted to went back to the Luge. I opted to go to the grocery store for snacks with Melanie and Gloria, then back to the motel for a shower and relaxation until everyone was done luging. The grocery store was interesting; I somehow thought it would be set up differently from an American grocery store, but nope – same general layout that I’ve seen at home. Interestingly, there was an America shelf in the international section.

Other memorable things we saw this day: The Mystery Machine. 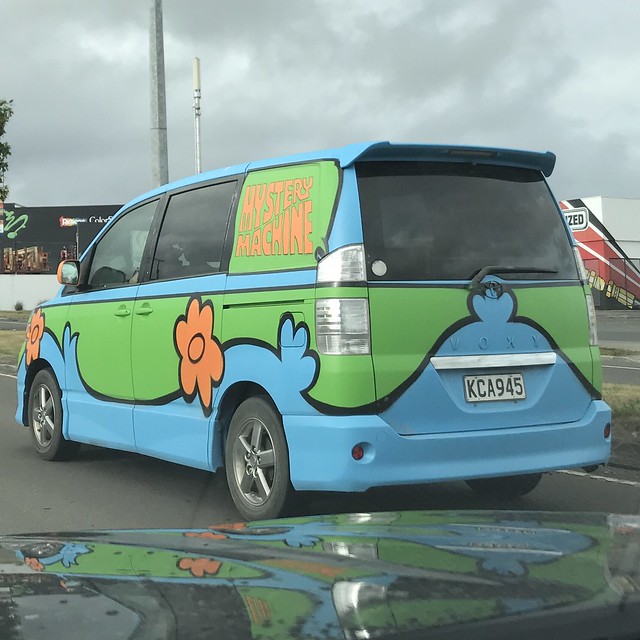 Other memorable things I ate:

I also tried a Cadbury Picnic bar on the way to Tairua on our second day in NZ. My review: the caramel & peanuts eclipse the crisp of the wafer cookie (like the cookie in a Kit Kat). The overall construction of the bar was not the greatest; chocolate covering the peanuts and caramel cracked and broke off outside the biteline when I bit into it, and was messy. The caramel was hard enough to stick to my teeth, which I suppose made it last longer. Just the one candy bar was enough. Perhaps there are conditions in which a Picnic bar must be eaten properly, like maybe it needs to be warmed slightly or broken apart in the package instead of bitten into or something along those lines?