An old college friend spotted this KnitHacker post about Carissa Browning’s Wonder Woman Wrap and asked me if I could knit it for her. I explained how I would price it (yarn cost + yarn shipping + $0.25/yard of yarn + project shipping = cost) and she agreed! She even used etsy and The Yarn Office to do the transaction to give it a boost.

I ordered the yarn that very day, July 5. Lazy Cat Yarn didn’t have the called for yarn (Opulence, 70% merino, 20% silk, 10% cashmere) in stock in the right red color (102 Sweet Dreams), so I ordered another yarn in the right color (Elemental, 100% superwash merino). I found Hedgehog Fibres sock yarn in pollen at The Knitting Bee and realized later that Elemental actually matches this yarn better than Opulence since the Hedgehog Fibres sock yarn is 100% superwash merino. Although Lazy Cat Yarns recommends hand washing, I did run the finished shawl through the washer on delicate with no problems.

By July 10 – just five days later – I had both yarns and began the shawl, which is worked from the bottom up. The finished shawl looks complex, but all the shaping and colorwork are done using increases, decreases, and short rows. Each row (or short row) is a single color, so there’s no tricky intarsia or stranding. Browning’s instructions and the shawl construction are broken into clear sections; she even provides an illustration of the finished shawl with the section you’re working on highlighted. It’s rare to see such a well-written pattern much less a free well-written pattern.

I confess I did make a few mistakes in the early sections before I figured out where I was in the pattern. I often find that when I start a project, I’m knitting blind, just following directions without fully understanding where I am in relation to the finished object. My internal concept of the project hasn’t formed yet and even with stitch markers it’s difficult for me to break stitches on my needle into understandable sections or to even distinguish the front from the back. Using stitch markers helps and this pattern relies heavily on them, and placing a removable marker on the front/public side of the work helps me also. Still, it took me until somewhere in the second section to fully comprehend the construction, the function of the stitch markers, and the so-called rules (like “End each row with an increase in the second to last stitch.”) I made noticeable mistakes because my stitch counts were off, but I doubt that my friend will ever notice them in the finished shawl. 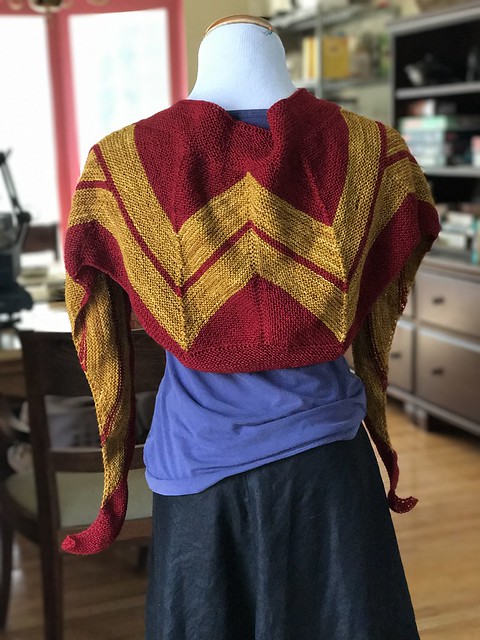 Overall, I’m happy with how it turned out. I wish, though, that I had matched the cast on (long tail, as called for in the pattern) with the cast off (Jeny’s Surprisingly Stretchy Bind Off). The cast on is firm and mostly unyielding, to the point that the bottom section spills over it if given a chance, while the cast off is so stretchy it’s almost disconcerting. On the positive side for both, at least there’s give in the part of the shawl that will be handled the most, the top, and I won’t worry about the recipient tearing or ripping it accidentally.

The only other thing I might change is the overall length. Tip to tip, the shawl is more than adequate but IMO it’s out of proportion with the top to bottom length. I did accidentally add extra rows to the final section (another mistake) but even so I wonder how observers will see and identify the WW pattern if the wrap is going to be functional. Of course, functionality isn’t the only purpose of any garment – they serve a decorative purpose as well. I just personally lean more towards functionality and utilitarianism over decoration, if that makes sense. To be clear: the wrap is functional, but it could be even more functional with additional length.

I would make this again and might make it again without any modification to the pattern. Perusing the finished projects on Ravelry, I saw lots of different color combinations, like this one which (to me) matches the Wonder Woman movie perfectly. Carrissa Browning herself posted different color combination ideas on Instagram and part of me wants to go questing for the perfect yarn in the perfect color (yes, I’m a perfectionist).

If you’re a WW fan – either old school or of the new movie (which I loved, BTW, go see it in theaters before it’s gone) – you need this wrap. It’s a relatively quick and easy knit thanks to Browning’s clever design.