One summer I grew tri-color peppers (capsicum annuum) from seed in a pot on our deck. As the peppers ripen, they turn from white to purple to yellow-orange to red and the plant is really pretty and did quite well. When it came time to harvest, I tossed a few shriveled peppers into our Meyer lemon tree’s pot because that also spends summers on the deck and it was convenient – I was thinking compost, not replanting. Fast forward a few years and the Meyer lemon shares a pot now with tri-color pepper plants.

This year the peppers were so plentiful and all ripe around the same time (convenient for spicing up turkey at holiday meals!), I decided to use them to make a hot pepper sauce. Unlike every other food blog, I’m not going to force you to read the entire post to get the recipe: here’s the one I used, Honey Roasted Hot Pepper Sauce.

Now, it looks like I would have a lot of peppers, surely enough to make a full recipe. But dear reader, I had a little less than half the required weight – only 3.8 ounces to the required 8 for the recipe. No matter – I thought I’d halve the recipe. I picked all the red to yellow colored peppers, along with a few purple ones by accident. I washed them – I’m waging an annual battle against aphids – in soapy water and rinsed, and started to cut the stems off. I think we need to get our knives sharpened because it ended up being faster and easier to snip the stems off with some new all-purpose scissors. I wondered if the stems would come off with roasting, but I didn’t want to experiment with that so kept on with the scissors. 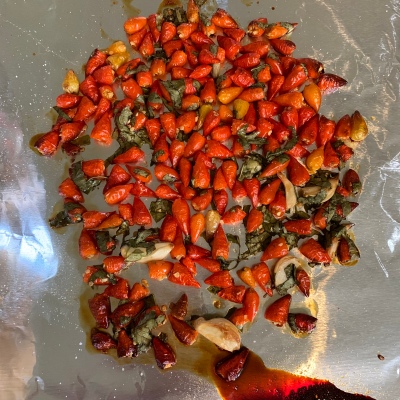 One reason I chose this recipe is that it calls for fresh basil and garlic both of which I have on-hand. It also calls for dark brown sugar, honey, and dark rum. I have everything but the rum – I substituted some Crown Royal (Canadian whiskey) and crossed my fingers. The recipe also calls for roughly chopping everything before roasting, which I didn’t do, as you can see. I decided the peppers are small as it is so why bother with extra chopping when it’s all going to get blended at the end anyway? I just increased the roasting time, which ended up being a mistake; the sugars went beyond caramelization to burnt. Also, the pan I used was too big so the roasting juices drifted away from the peppers and I should have used some oil (but the recipe didn’t say to do that!) because everything stuck to my foil-lined pan.

I scraped the foil and put the peppers in a canning jar I bought a few years ago when I made a Scotch Bonnet-based pepper sauce. The recipe calls for keeping some liquid in reserve before you roast the peppers and although I only had a teaspoon of it, I added that to the jar along with apple cider vinegar. I then got the stick/immersion blender out and discovered just how little roasted pepper mixture I had: it splattered and there wasn’t quite enough for the immersion blender to work properly. Still, I persevered and made it work by using a paper towel as a shield over the top of the jar.

The sauce is supposed to sit for 24 hours to let the flavor meld, but of course I tried it. It’s hot, hotter than Sriracha hot. I might add some more apple cider vinegar and honey, maybe even some fruit – mango perhaps? What would you do?